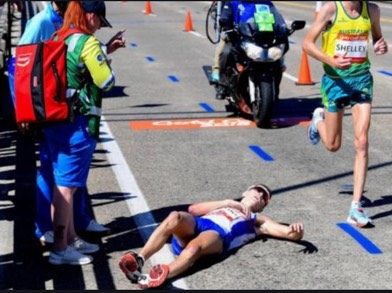 Heat related illness has been well documented throughout human history. Heat stroke specifically, which is the most life threatening manifestation of heat related illness, is thought to be amongst the oldest known medical conditions with references to “violent heat” causing stupor, convulsions, and death appearing in Hippocrates’ writings as early as 400 BC (Casa, 2010). Despite advances in medicine and education regarded heat exposure, heat related illness continues to be a major cause of morbidity and mortality in the modern era.

In North America, heat stroke remains the 3rd leading cause of death in athletes (Joshua, 2015). Amongst the general population, at least 3,332 deaths were attributed to heat stroke from 2006 to 2010 in the USA alone (CDC, 2010). The number of deaths due to heat related illness was higher during the period from 2005 to 2009 than any other five-year period over the last 35 years in the United States (CDC, 2010). This trend is not isolated to North America as countries around the world are experiencing an increase in the number of heat related illness deaths as average global temperatures continue to rise. It is predicted that by 2050, heat stroke related deaths will increase by 2.5 times the current annual baseline (Toru Hifumi, 2018).

While individuals residing closer to the equator are undoubtedly at a higher risk, heat related illness strikes at a wide geographical and occupational range. Moreover, morbidity and mortality are often higher in historically cooler countries experiencing above average temperatures due to the lack of acclimatization in the population (Casa, 2010).

The 2003 European heat wave generated the hottest summer on record in Europe since at least 1540. Peer-reviewed analysis places the European death toll at more than 70,000 people. France was struck particularly hard with 9 consecutive days in which temperatures of greater than 40 °C were recorded, resulting in more than 15,000 deaths in France alone (Jean-Marie Robine, 2008). This is especially tragic when considering that heat stroke, if identified early and treat aggressively, is reversible. The human cost and economic burden of heat related illness cannot be overstated, with many countries around the world routinely reporting thousands of deaths each year across athlete and non-athlete populations.

The cardiovascular, endocrine, renal, nervous, and digestive systems all play major roles in acclimatization to heat. Any comorbid conditions affecting these systems will result in slower and/or less complete acclimatization. Moreover, any significant medical issue will result in impaired heat tolerance (Hajat, 2010).

Acclimatization is accelerated by moderate salt restriction and correspondingly delayed by high dietary salt intake. Many of the adaptations seen in heat acclimatized athletes also occur in athletes who are well conditioned to aerobic exercise. Despite this, the well-conditioned athlete is not heat acclimatized by default and will require the same 100 minute per day of heat exposure for 7 to 14 days before fully acclimatized (Joshua, 2015).

The chemical breakdown of food into energy is a largely exothermic process within our bodies. The basal metabolic rate for a 70 kg person generates approximately 100 kcal per hour of heat energy. In the absence of active and passive cooling mechanisms, this constant heat energy production would result in a 1.1°C rise in core body temperature every hour (Howe, 2007). As metabolic rate increases so too does heat energy production. During strenuous physical exertion heat production can increased 20-fold. Thus, highly efficient passive and active cooling mechanisms have evolved over time to combat the huge amount of heat energy produced by our bodies (Osilla, 2019).

A group of neurons within the anterior hypothalamus, distinct from thermosensing neurons, forms the central integrative area within the brain which is responsible for collecting temperature information from thermosensors and comparing this data against the physiologic thermal set point, which is around 36.8°C. Central integrative areas process this information to then appropriately activate thermoregulatory effectors in order to maintain normal core temperature (Osilla, 2019).

Thermoregulatory effectors are the tissues and organs by which the central integrative areas regulate core body temperature to maintain the thermal set point. Thermoregulatory effectors are contained in nearly all organs systems and include vasodilatation of blood vessels, activation of sweat glands, increased respiratory rate, and behavioral changes such as seeking shade. Many minor heat related illnesses occur as a direct result of thermoregulatory processes such as vasodilation in the case of heat edema, while heat stroke occurs as a result of the complete breakdown of thermoregulatory mechanisms leading to uncontrolled core temperature elevation (Osilla, 2019).

Conduction involves transfer of heat energy through direct contact. Energy is transferred from higher temperature objects to lower temperature objects through this method. Heat dissipation due to conduction is low, approximately 2% of body heat generated is dissipated in this manner. This is due to the fact that air is a good insulator and thus transfers little heat energy to itself through conduction (Joshua, 2015).

Radiation is the direct transfer of energy through electromagnetic waves. Radiation accounts for approximately 65% of heat dissipation, largely in the form of infrared wavelength radiation. Radiation as a cooling modality functions best in colder environments. Moreover, radiation can be a major source of heat energy gain as electromagnetic waves from the sun heat the skin and underlying tissues. During the summer months, 300 kcal per hour can be gained by a person exposed to direct sunlight. This represents approximately three times the heat generation of basal metabolic function and can rapidly lead to hyperthermia (Leon, 2015).

Evaporation is the conversion of a liquid into its gas phase through the addition of energy to the liquid. In human thermoregulation this process occurs through sweating. Excreted sweat absorbs heat from the underlying skin and is converted to water vapor in the process. This reaction is capable of removing 0.6 kcal of heat energy for every 1 mL of sweat evaporated. This process becomes less effective as ambient humidity rises. However, evaporation remains the dominant mechanism of heat dissipation when environmental temperatures exceed skin surface temperatures (Leon, 2015). 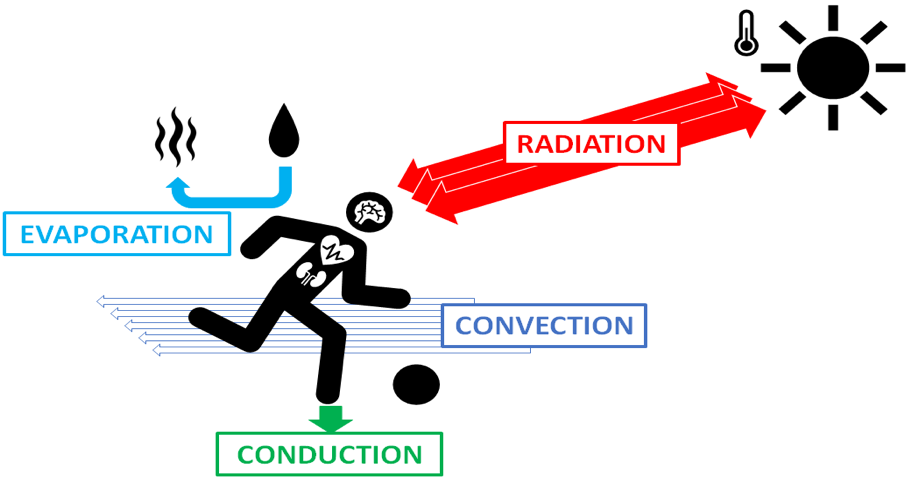 Human heat dissipation mechanisms are comparable to an automobile’s cooling systems. Metabolic heat production (motor) is dissipated as blood (coolant) is circulated by the heart (pump) from central vasculature (piping) to the skin surface (radiator) where evaporation of sweat cools the blood before it is returned to the core. This process is monitored and controlled by the anterior hypothalamus (thermostat). The net effect is dissipation of heat energy (Platt, 2014).

Dysfunction in any of these components may result in heat accumulation and core temperature rise. Ineffective circulating volume significantly increases the risk of heat related illness. Dehydration is common in hot environments, particularly in athletes who rarely replenish the volume of water they lose through sweating during a given athletic event (Howe, 2007). Individuals with comorbid cardiac conditions may have ineffective circulating volume despite euvolemic fluid levels, as a result of poor cardiac contractility. Additionally, many of the drugs utilized in cardiac disease may prevent the necessary increases in heart rate and stroke volume required to properly supply the vasodilated vessels of the skin for cooling. Individuals with peripheral vascular disease may also have impaired blood supply to these vascular beds despite adequate fluid levels and cardiac function (Platt, 2014). 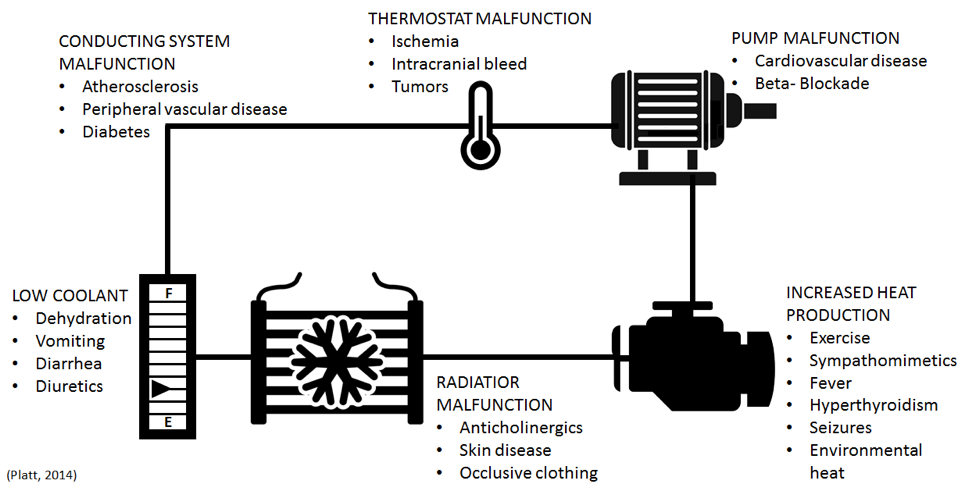 Evaporative cooling at the level of the skin requires functioning sweat glands and adequate skin integrity. Anticholinergic medications may prevent sufficient sweat production to effectively cool circulating blood. Additionally, dermatologic conditions such as scarring or scleroderma may prevent vasodilation over a given area of skin, thus limiting the amount of heat dissipated regardless of adequate sweat volume (Platt, 2014).

Even with intact cardiac, vascular, and dermatologic function, heat illness may still arise if heat production exceeds the body’s capacity for heat dissipation. Sympathomimetic drugs and hyperthyroidism push endogenous heat production beyond levels which the body can cope with through thermoregulatory mechanisms (Platt, 2014). The Sun represents the most dangerous exogenous heat source in both athlete and non-athlete populations. Environmental heat not only adds heat load to the body but also impairs cooling mechanisms and heat dissipation. In the absence of any other pathology, additional heat load from direct sun exposure during the summer months is enough to generate heat illness, particularly in exertional cases (Howe, 2007).

Ongoing heat stress results in the release of large quantities of interleukin 1 and 6. These immune molecules activate leukocytes and endothelial cells which in turn release proinflammatory cytokines. The result of this signaling cascade is increased vascular permeability and vasodilatation (Toru Hifumi, 2018). Initially, these responses are beneficial as they result in heat dissipation. However, as heat load accumulates and core temperature rises, the surge of proinflammatory cytokines leads to a systemic inflammatory response state. If core temperatures are sustained at or above 42°C, thermoregulatory mechanisms begin to fail (Bouchama A, 2002). Additionally, cellular stress results in massively increased metabolic demand leading to rapid elevations in core temperatures which are already dangerously high. Brain tissue is highly susceptible to this process and if core temperatures are sustained beyond 42.5°C protein denaturation will result in neuronal cellular death. The eventual clinical manifestation is that of distributive shock, end organ ischemia, hypoxic brain injury, and cardiac collapse resulting in death (Toru Hifumi, 2018).

· Cardiac: demand ischemia due to massively increased cardiac output. As cells die, they spill their intracellular contents into the blood. The resulting hyperkalemia may precipitate dangerous arrythmias (Platt, 2014).

· Hepatic: Liver cells undergo apoptosis as a result of ischemia and pro-apoptotic cytokine release in the gastrointestinal tract (Platt, 2014). 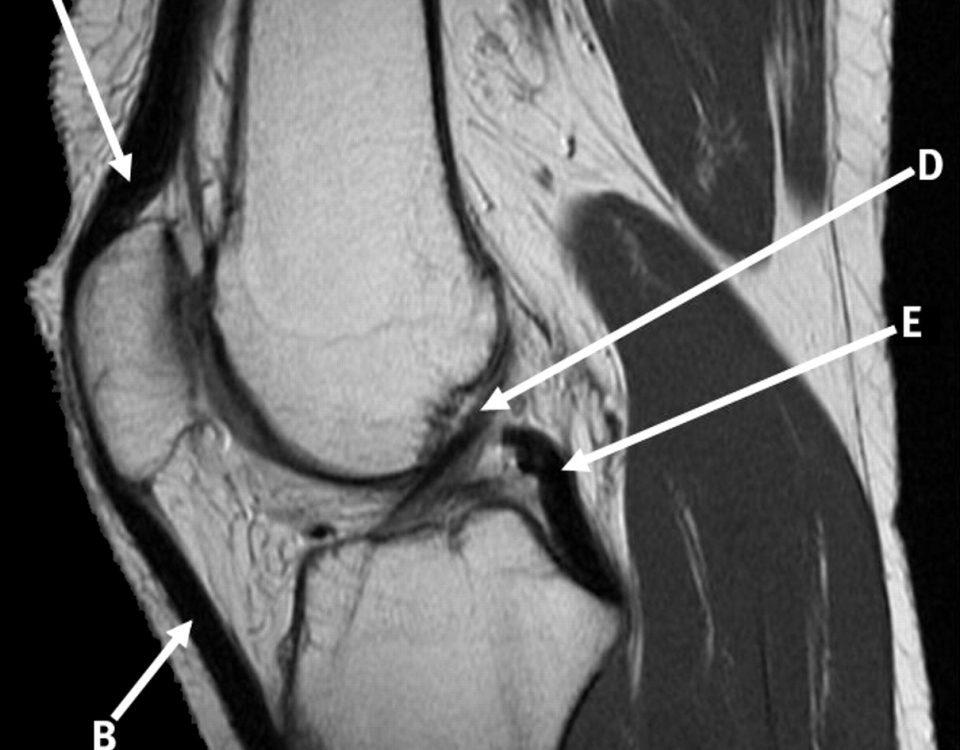 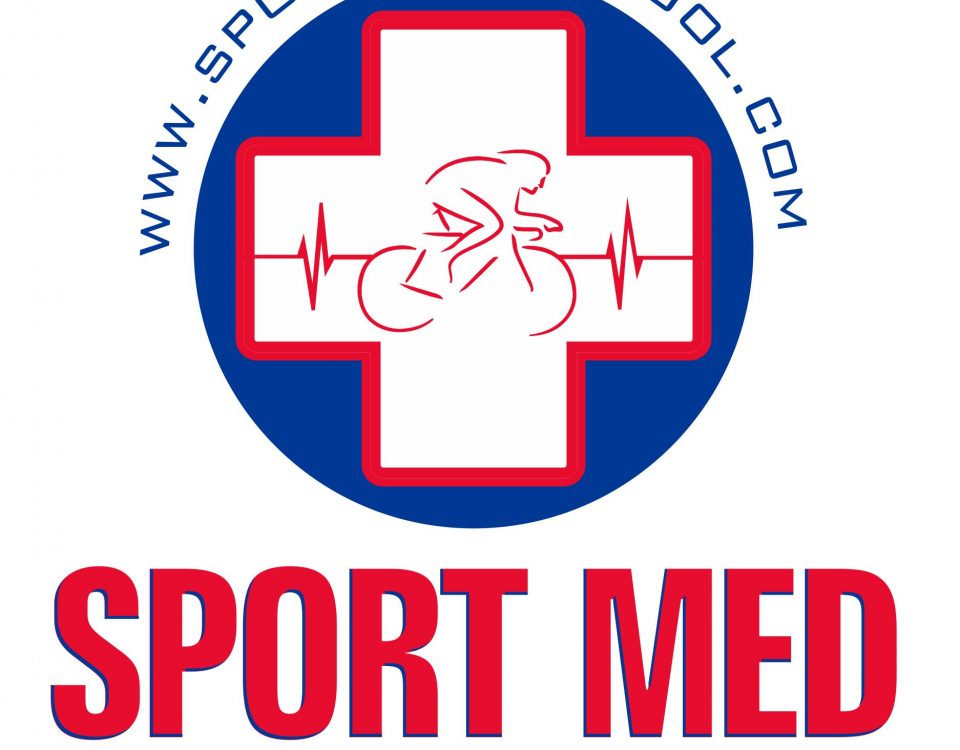